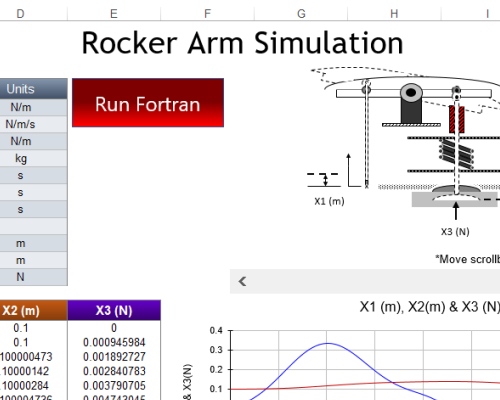 Learn to combine the powerful UI and data abilities of Excel VBA with the speed of Fortran to produce problem solving engineering and science tools.

How our class can help you.

Our 3-day class shows you how to combine Excel VBA's "off-the-shelf" features with the computational power of Fortran to produce lightning quick apps. There is a tremendous amount of legacy Fortran code and libraries out there that have been verified and tested but lack a modern interface. This class solves that problem.

In addition to the legacy aspect, modern Fortran itself is quite easy to learn and just blazingly fast when it comes to number crunching. It clocks in at about 40 times faster or higher than VBA when running simulations. Why not leverage it?

Join us and our class will show you how to unleash Excel VBA as pre/post processor to Fortran and shows you the coding specifics to get the job done quickly.

How we run the class: We focus our Excel VBA / Fortran class on what our customers need. When class begins, we analyze those needs and shift our outline appropriately. We will stress topics or add topics that our customers want. No two classes are ever the same with EMAGENIT.

Why Run Fortran from Excel VBA?

Controlling and Looping Through Workbooks, Worksheets, and Folders for Fortran DLL Data

Designing a Fortran Routine to be Called from Excel VBA

Passing Data from Fortran Back to Excel VBA

Compiling and Debugging a Fortran DLL

Select this Excel VBA training if you or your group have:

If you need to contact us about our class.

You can email us at info@emagenit.com >